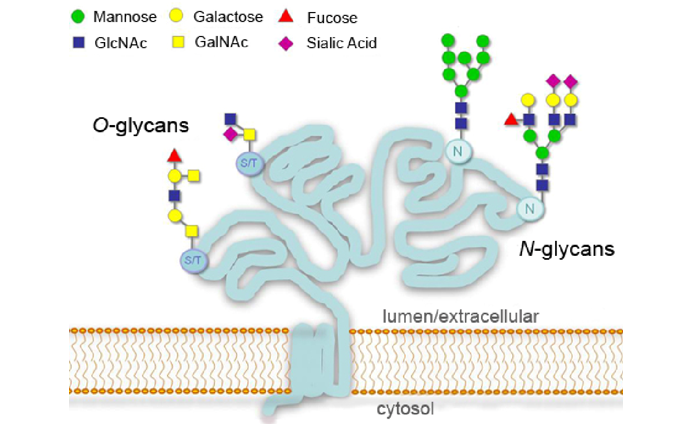 The Role of Glycosylation Modification

Protein glycosylation is one of the most extensive, complex, and important post-translational modifications. It is inferred that more than 50% of the proteins have undergone glycosylation modification. These glycoproteins are widely distributed in living bodies, especially abundant in cell membranes and body fluids. Most membrane proteins and secreted proteins are glycoproteins. Glycosylation modification not only affects the spatial conformation, biological activity, transport and localization of proteins, but also plays an important role in specific biological processes such as molecular recognition, cell communication, and signal transduction.

The zona pellucida on the surface of vertebrate egg cells is a specific type of glycoprotein that is essential during the process of sperm egg recognition, adhesion, and membrane fusion. The sperm receptor glycoprotein is a key molecule that induces sperm-egg binding. Only when the sperm is combined with a high degree of specificity can the acrosome reaction be induced to achieve fertilization.

In addition, most of the molecules involved in the immune response are glycoproteins, such as immunoglobulins, cytokines, the complement system, and leukocyte differentiation antigens. Their sugar chain structure is involved in B cell activation, T cell activation and apoptosis, antigen processing and presentation, and affects the structure and function of immunoglobulins. T cell also plays a role in regulating lymphocyte activation and apoptosis, antigen recognition and clearance, cell adhesion, signal transmission, and endocytosis.

Traditional research methods include separation analysis by chromatography or electrophoresis, X-ray crystal diffraction or nuclear magnetic resonance (NMR) structural analysis, and functional analysis by biological methods. However, due to the high complexity of glycosylation modification, these methods are cramped and limited.

High-throughput biomass spectroscopy has been more developed and hence, became widely used in glycosylation research. Since the 1980s, the development of soft ionization technology represented by the matrix-assisted laser description ionization (MALDI) and electrospray ionization (ESI) has made the analysis on biological macromolecules with molecular weights of tens or even hundreds of thousands at pmol (10-12mol) to fmol (10-15 mol) levels more accurately. This technology brings a breakthrough for the application of mass spectrometry in the research of biological macromolecules.

1. Separation and enrichment of glycopeptides.

In addition to enrichment and enzymatic hydrolysis, sample preparation processes such as protein denaturation, desalination, and high abundance removal are also the basis and key to mass spectrometry analysis. The purpose of protein denaturation is to destroy the three-dimensional structure of the protein. The resultant stretched-out protein is beneficial for the enrichment and enzymatic hydrolysis to proceed more fully. Mass spectrometry is very sensitive to salt. The non-volatile salts commonly used in biological sample processing will inhibit the ionization of the sample, resulting in reduced detection sensitivity or even failed detection. Therefore, desalting is required before mass spectrometry. In special samples such as serum, a few proteins often account for the vast majority of the total amount, inhibiting the effective analysis of a large number of low-abundance target proteins. Therefore, it is necessary to remove highly abundant proteins.

Quantitative techniques for protein glycosylation are based on qualitative research techniques. By comparing the peak intensity and peak area of parallel samples, the change characteristics of the quantity are analyzed. Quantitative methods based on mass spectrometry can be divided into semi-quantitative, relative quantitative and absolute quantitative. Semi-quantitative means adding a standard as an internal standard, or using analysis software and other means to compare peaks with specific mass-to-charge ratios in different spectra. Relative quantification, by isotopically labeling peptides, sugar chains and other analytes, causes the difference in the quality on analytes of different samples, so that different samples can be compared in the same spectrum. Absolute quantification uses the selective reaction monitoring (SRM) or multiple reaction monitoring (MRM) developed in recent years to determine the absolute content of specific proteins in samples.