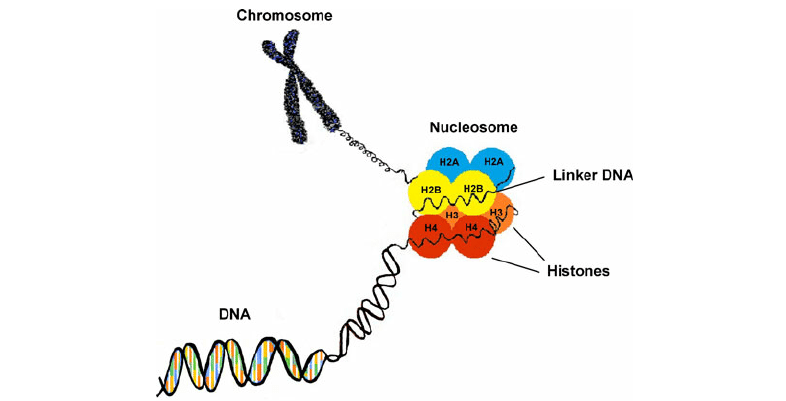 Found in eukaryotic cells, histones are proteins that package DNA into nucleosomes. Histones H2A, H2B, H3, and H4 are defined as core histones that exist as dimers to form octameric nucleosome core, which are wrapped by approximately 146 bp DNA. The nucleosomes are joined by DNA and histone H1 to form chromatin fibers. As essential as they are in chromosome assembly, histones can be post-translational modified to regulate the dynamic expression of genes.

Histone modifications, including methylation, acetylation, phosphorylation, ADP-ribosylation, ubiquitination, and subgroup ubiquitination, begin from the N-terminal tails and move on to the globular domain. These modifications contribute to the binding of other proteins to DNA, resulting in synergistic or antagonistic effects to regulate gene transcription. Take histone acetylation as an example. Histone acetylation and deacetylation are in dynamic equilibrium. The levels of histone acetylation are regulated by histone acetyltransferases (HATs) and histone deacetylases (HDACs). HATs transfer the acetyl group of CoA and acetyl-CoA to specific lysine residues at the histone N-terminus. After the histone carries the negatively charged acetylated group, it is mutually exclusive with the negatively charged DNA. Therefore, DNA entanglement becomes relaxed and can bind to transcription factors to promote gene expression.

1. Extraction and purification of histones

Hypotonic lysis buffer is added into the cell pellet. The cell membrane is cleaved by mechanical shear force and the nuclei are separated by centrifugation at low speed. The nuclei are then broken down and histones obtained by acid extraction or high salt extraction. HPLC is used to isolate and purify various histone components for further analysis.