This assay takes advantage of polydimethylsiloxane (PDMS)-based microchips that include needle inserting channels. The PDMS chip is first treated with O2 plasma for one minute and then sterilized under UV lights for 5 minutes. Next, the iced-cold neutralized collagen solution was added in the three chambers- the two reservoirs and the microvessel chamber. Immediately, an acupuncture needle is inserted within the PDMS channels and the collagen is withdrawn from the two reservoirs. Then, the chip is incubated to allow the collagen to gel. Once the collagen is fully gelled, the needle is withdrawn leaving channel within the collagen. Cells will be seeded near each opening of the collagen channel and then culture medium will be added in the chip to incubate the cells for a proper time. After cells incubated for enough time, the microvessel is stained to enable its visualization by confocal microscopy. The permeability of the microvessel can be visualized and the extent of the vascular permeability can be assessed by this method. 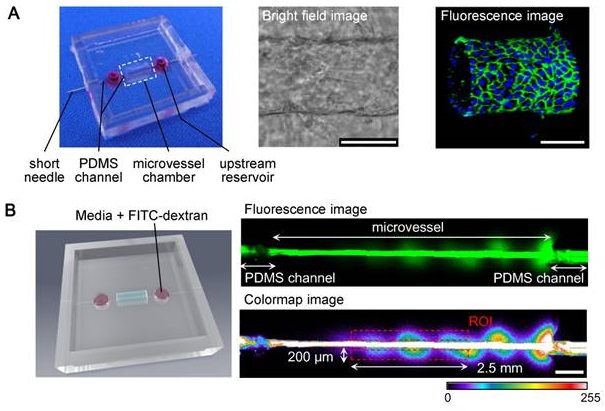